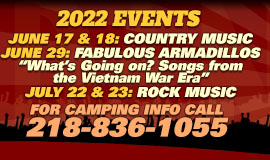 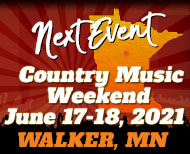 WALKER -- When things are quiet, the drive through Walker takes about a minute.

On a busy summer day, with tourists about, the drive can be extended a couple of more minutes.

Then there’s Moondance Jam, Walker’s annual rock music festival which is in its 12th year. On Wednesday and Thursday the drive through downtown Walker was a potentially maddening adventure in break tapping and pedestrian dodging.

While those kinds of conditions could cause rising blood pressure if you’re behind a steering wheel, it also means plenty of foot traffic and cash register duty for local retailers.

The Y-Bottle Shop, a liquor store just a couple of miles away from the Jam site, was so busy Thursday afternoon employees couldn’t slow down to answer a couple of questions about business. Business, it seemed, was good.

That was the story at Benson’s Eating and Drinking Emporium and the Village Square Pizza and Ice Cream as well, where things were so busy nobody -- owners and managers included could spare a few minutes.

Rebecca Greer, the manager at Country Inn and Suites, said business so far has been strong.

The hotel is booked to capacity on Friday and Saturday, although that’s a normal occurrence for a summer weekend.

“All our weekends are usually booked,” Greer said.

She added, however, the Jam has given the hotel a nice Wednesday and Thursday boost.

Jammers, Greer said, have been making hotel reservations since January, the earliest the Country Inn accepted bookings for this week.

Greer also said the Jam’s boost has helped in the face of a weak economy and the war in Iraq.

Like Benson’s and the Village Square, employees at the Walker Municipal Liquor Store were too wrapped up with customers to answer questions.

That scene was repeated all over Walker as Jammers -- identifiable because of their brightly colored bracelets -- walked in and out of stores, whether gift shops, a drug store, sporting goods stores or restaurants.

Trevor Berg, who owns Hoss’ All American Liquor just outside of Walker, was in good spirits Thursday afternoon as Jammer after Jammer filed into his store looking for beverages to take back to the Jam fairgrounds.

Berg, who was in the middle of a tequila sale, said business has been good since the Jam got underway Wednesday.

“For us there’s been a noticeable difference,” he said.

While the rain slowed things down a bit, he thinks Wednesday and Thursday were stronger than they normally would have been.

“Yeah, no question about it,” Berg said.

Thanks to Moondance Jam, business has also been very strong at the AmericInn.

Anthony Besett, the AmericInn’s manager, said the hotel is completely booked, and 100 percent of guests are Jammers.

Besett added the behavior of Jammers in the hotel has always been “awesome.”

Typically, Besett said, Jammers make their reservation as much as a year ahead of time, some even make next year’s reservation as they’re checking out after this year’s Jam.

He noted the Jammers who stay at the AmericInn are people who attend the Jam for the music and a good time but also want a quiet night’s sleep away from the activity of the fairgrounds.

Yet the Jam isn’t a boon for everyone. Carl Shimer, the manager at the Fireside Supper Club, said because the restaurant is located near the Jam site, many of its regulars don’t come out because of the traffic, which can sometimes take more than an hour to get through.

He also noted a lot of Jammers are looking for quick, inexpensive meals while attending the event.

“A good percentage of people at the Jam want to spend money there, but on things like corndogs,” Shimer said. “A lot of them aren’t interested in buying a $20 steak or $20 seafood. Not that they don’t have money, they just want to eat there.”

Tiffany Greenway, who works at the Leech Lake Area Chamber of Commerce in Walker, said things “have been great” since this year’s Jam opened.

Greenway said while the community likely would have been busy this week with tourists, Moondance Jam has drawn more people than usual to Walker.

Many of the chamber’s members, Greenway said, reported to her Jammers were in town looking for clean and dry clothes and socks after Wednesday and Thursday’s rainy weather.

From her perspective the entire community has enjoyed a solid economic boost.

“I think so,” she said. “Others in the membership agree.”